Lin Li received his Bachelor’s degree from Chang’an University, China in 2004. After working at the Institute of Harbor Survey and Design in Anhui Province as a technician for highway design (field survey, pavement structure, and highway alignment) for one year, he returned Chang’an University in 2005 for his first Master’s degree and graduated in July of 2008. The research topic was “Structure Design for Highway underlying with Over-Wetted Soil.” He came to the United States at the end of August 2008 and started to work on his second Master’s degree on “Impact of Fines Content on Resilient Modulus Reduction of Base Courses during Thawing” under the supervision of Drs. Xiong Zhang and Jenny Liu. He received the second Master’s degree in 2010 and then continued on with his Ph.D. study under supervision of Dr. Xiong Zhang.

During his Master’s and Ph.D studies in University of Alaska Fairbanks, he has published 10 journal papers, 10 conference papers, and 5 project reports. He has also presented his research at professional meetings such as Transportation Research Board (TRB) Annual Meetings in 2011 and 2015, the 10th International Symposium on Cold Regions Development in Anchorage, Alaska, 2013, and the International Symposium of Climate Effects on Pavement and Geotechnical Infrastructure in Fairbanks, Alaska, 2013.

Congratulations to Lin Li and best wishes to his career after graduation! 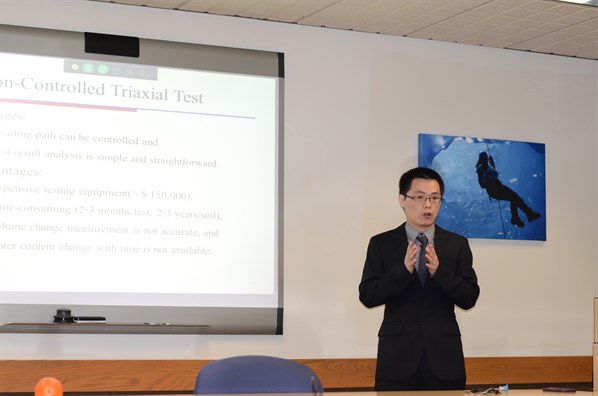