Road-width thermal cracks (major transverse cracks) are perhaps the most noticeable form of damage on asphalt concrete (AC) pavements throughout colder areas of Alaska that require allocation of a significant portion of DOT Maintenance and Operations budget to repair them. Precutting thermal cracks, implemented by saw cutting of slots across the pavement, has been demonstrated as a lower-cost but equally effective form of maintenance by long-term observation of pavement performance in Minnesota and Alaska. However, a systematic approach has not been developed to implement application of precutting in AC pavements. In addition, there is need to further understand important precut variables in the thermal cracking process through long-term field monitoring. This study is to address these research needs, including precuts installed on: 1) new pavements placed on new embankments and 2) new pavements placed on existing embankments—the latter having already developed thermal cracking in the sub-pavement aggregate. The objective will be achieved through continuing to evaluate the three sites in interior Alaska where precutting has been done: 1) Phillips Field Road within Fairbanks city limits, precut in 1984, 2) Richardson Highway about 20 miles east of Fairbanks, precut in 2012, and 3) Parks Highway about 100 miles south of Fairbanks, precut in 2014. 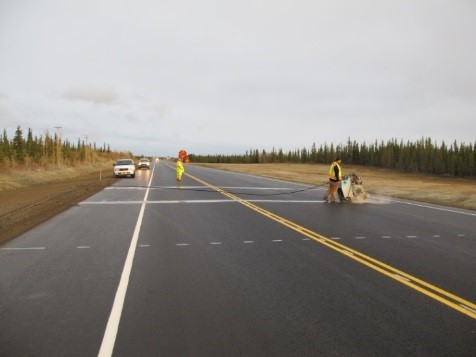